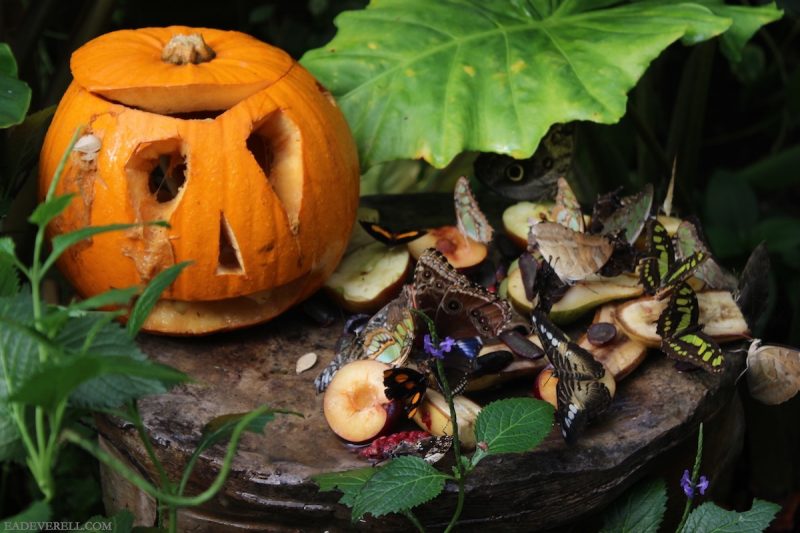 Dear Writers,
Don’t forget that How to be the Heroine of Your Own Story is on pre-order until 10 December. This is the best best best price at which it will ever be available, and I wouldn’t want you to miss it if you’re interested in taking the course.

I’ve had 3 colds in 3 locations in 1 month, which may be a personal record, but one which I’m willing to forgo! I’ve also ridden in the front seat of an ambulance, and had much cause, once again, to admire and thank the NHS.

In the scant spare time I’ve had between nose-blowing and fangirling, I’ve almost finished the first draft of The (revised & greatly expanded) Female Correspondent. It’s been a new experience, working on a longer story, slowing down and really giving the characters a chance. Everything I’ve learnt through working on the Lady Writers League has come into play, and recently I’ve found it especially practical to use the concept of Stasis and Resolution characters when I need to introduce a minor character on the fly. This helps so much with fitting the character into the existing story, and giving them a sense of purpose, rather than creating a random person who I’ve hurriedly cobbled together from real life. Perhaps when I’m more experienced I won’t need the framework, but until then, I’m no Dickens!

I’ve also been consciously working on improving my depictions of characters’ thoughts and feelings. I’d like more subtlety and power. I don’t know if the objective-correlative/iceberg theory/cognitive bias ilk of techniques are the answer, but I think they’re a good start. My only worry is that it’s literary men making up these best practices, and I’m not sure how suited they are to a fairly feminine genre, or if there isn’t an underlying bias against expressing emotion, and if there is, what sort of implications that has. I think of myself as fairly unemotional (though not unfeeling!) and find myself drawn to characters with “quiet” minds, but I’m not sure this is a tendency I should encourage?

At any rate, I find that thinking about thinking has certainly made me think more. And that’s a good thing, I think.

Moths & Butterflies at Stratford Butterfly Farm
The Butterfly Farm is one of my favourite places to be. It’s the perfect temperature on a cold autumn morning, and the tropical greenhouse always reminds me of that scene in Angels and Insects, especially with so many frisky morphos around.

I was lucky enough to see a few of the gorgeous atlas moths, which only live for a few days. They are about a handspan in width but have no mouths! 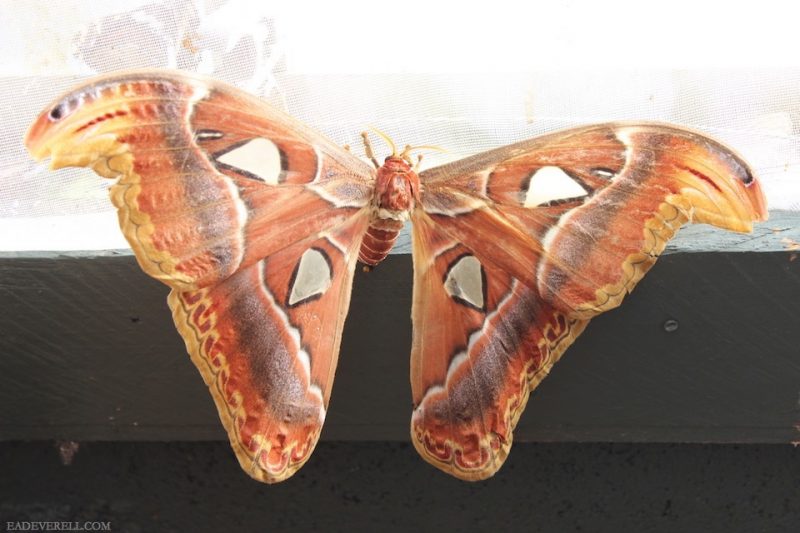 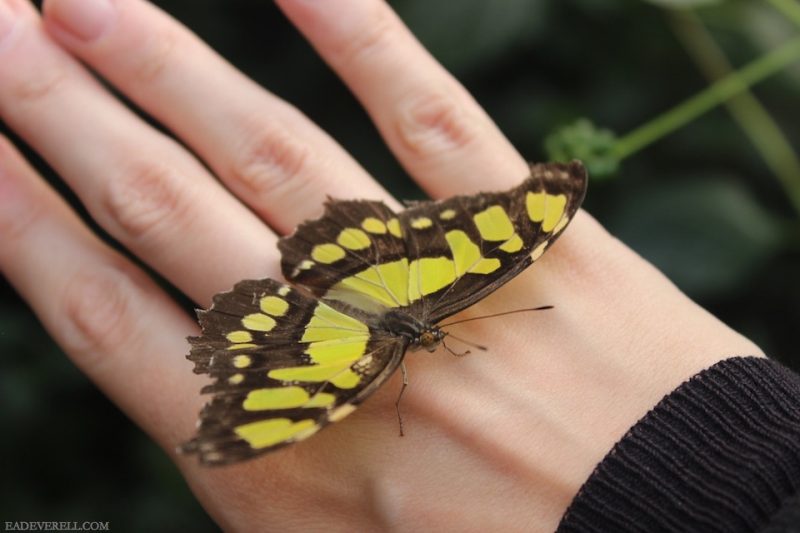 … and that beneath their elegant wings, they have really funny expressions. Hi! :D 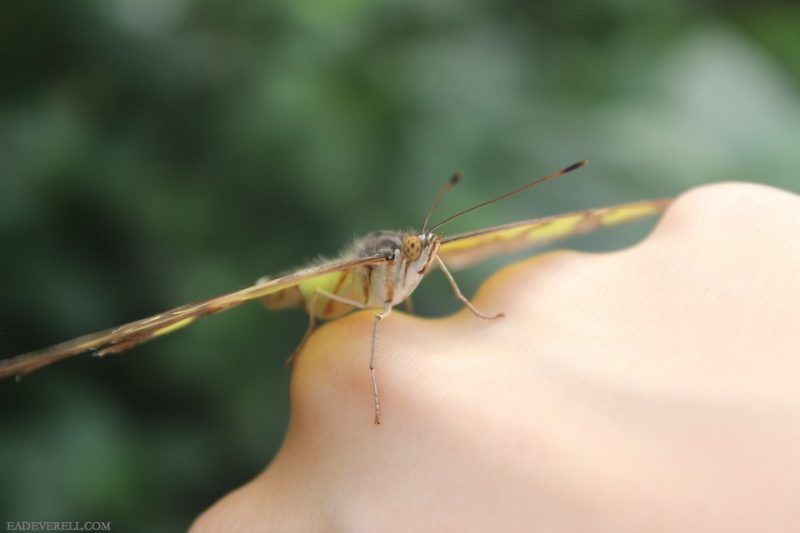 Shakespeare’s Grave
Yes, I’m one of those tourists! I paid my respects to the Bard, but not for one moment did I feel he was more present in his ornate resting-church than in his words.

I visited several other Shakespeare spots last month, and I’ll be posting a literary walk around Stratford-upon-Avon soon.

Marie Corelli’s Grave
Marie Corelli is one of my favourite heroines, and it was inspiring to see her angel, and I’m sure she would have heartily approved of her old home being used as the HQ of Birmingham University’s Shakespeare Institute.

Chess Sets at the Gökyay Chess Museum
This museum houses a wonderful selection of chess sets, including some literary favourites like Sherlock Holmes, Winnie-the-Pooh, and Harry Potter. Sadly when I visited, the Star Wars sets were away on tour. 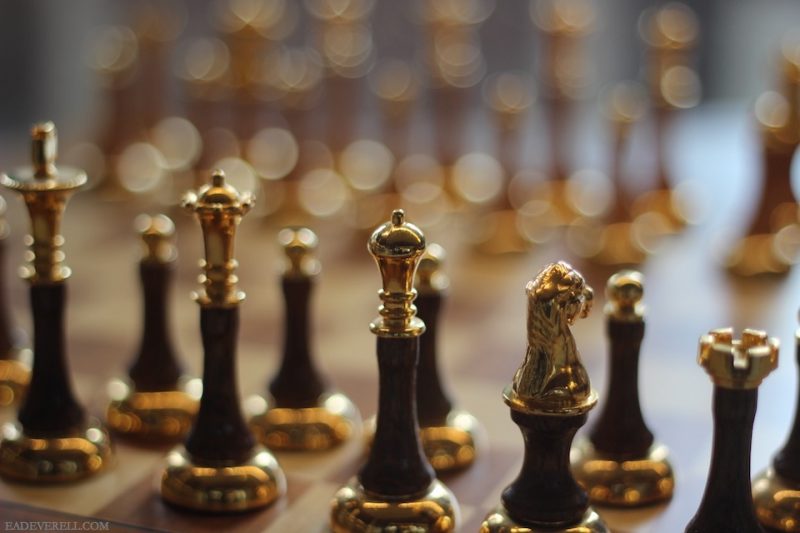 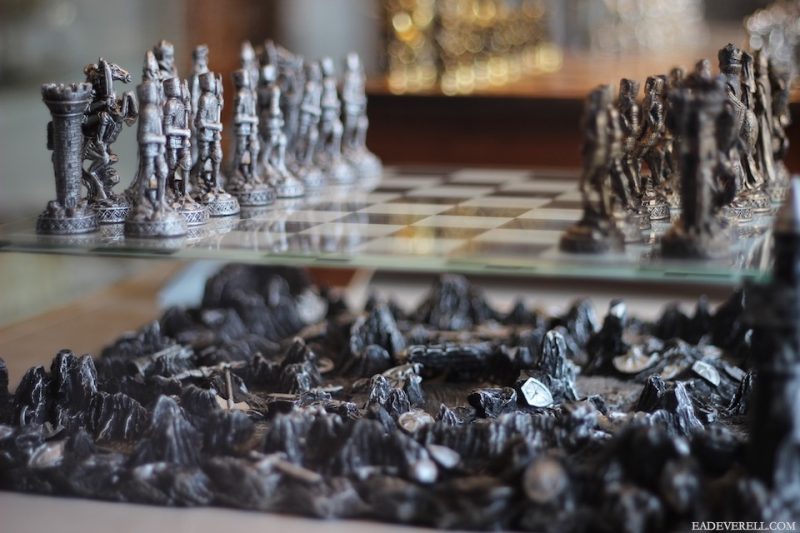 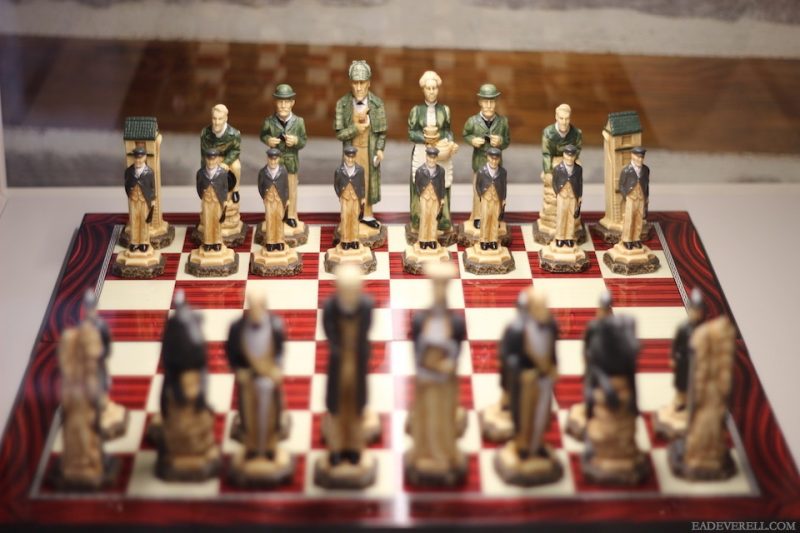 The Book of Dust: La Belle Sauvage by Philip Pullman
I’m still too overwhelmed to say anything other than that I adore everything about this book and I will be typing up more detailed notes soon.

Daemon Voices by Philip Pullman
2 books from Philip Pullman in as many months is just too much! I will be dipping into this collection and I’m sure I’ll quote from the essays at length in lessons, blog posts and newsletters! :)

Madness is Better Than Defeat by Ned Beauman
Ned never disappoints! To me, this felt like a mixture of early cinema and early surrealism. As with all of his novels, it isn’t for the prudish or prudent, but I love everything he writes because it’s always hilarious and interesting. Also, I suspect he has a personal challenge never to write a likeable character.

Sir Joseph Banks by Patrick O’Brian
This was serviceable as a biography, but having expected some of O’Brian’s fictional genius to filter through into his non-fiction, I was a bit disappointed.

High Performance Habits by Brendon Burchard
Brendon has been a huge inspiration for me, and I think this is his best book yet. One of the hidden benefits is all the fascinating academic papers I’ve discovered through it!
If you want to see what a high performer’s day-to-day life looks like, and get a motivation kick at the same time, be sure to subscribe to Superwomanvlogs. She’s called Superwoman for a reason!

The Structure of Scientific Revolutions by Thomas Kuhn
Kuhn coined the phrase “paradigm shift”, and I wanted to read this paper to see if it would shed some light on the Shift of the One Page Novel. It did, and more besides. I’ll be writing up my notes into an advanced lesson soon.

The Sorrows of Satan by Marie Corelli
A novel like this makes it easy to see why Corelli was so popular in her heyday, and why she is barely remembered today. Personally, I’m old-fashioned enough to love it!

Also, I thought it was interesting that Lucio was so fond of tokay, just like Lord Asriel. Is there a link between tokay and fallen angels that I don’t know, or is it the wine of princes as well as kings? :) 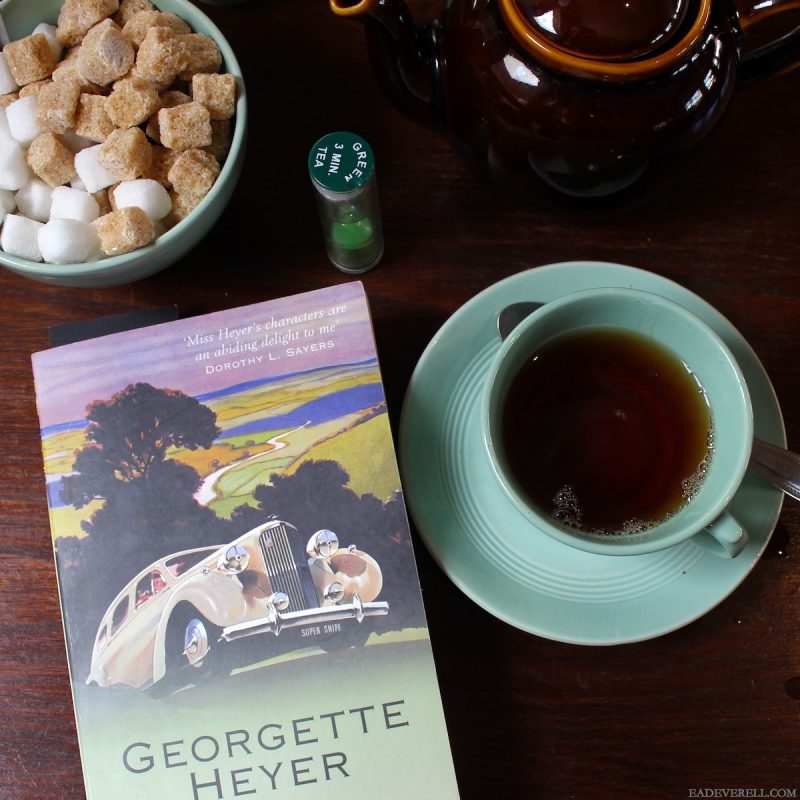 Envious Casca by Georgette Heyer
This is the first of Heyer’s modern novels I’ve read, and quite a different experience to her Regency novels. As always, her characterisation is spot on, and as far as cosy Christmas mysteries go, this was very enjoyable, if not quite as fun as her historical stories. The title, by the way, is from Shakespeare’s Julius Caesar – Mark Antony referring to Servilius Casca who was one of the senators who conspired to assassinate Caesar.

Nabokov’s Favourite Word Was Mauve by Ben Blatt
Of course this caught my attention because of Nabokov, and I’m so glad it did! This is a good introduction to text mining, but I think its forté is that Blatt tries to interpret the data in a way to render it useful for writers.  Blatt’s stats also bear up one of my hypotheses from august, concerning the difference between first novels and later novels. He calls this “book inflation”.

My Alethiometer Cards
This project has been a long time in the making, but I decided to finally knuckle down and finish it in celebration of the release of The Book of Dust. I’m so glad I did! I’ve been using these cards instead of my Tarot deck for the past month with consciousness-expanding results. 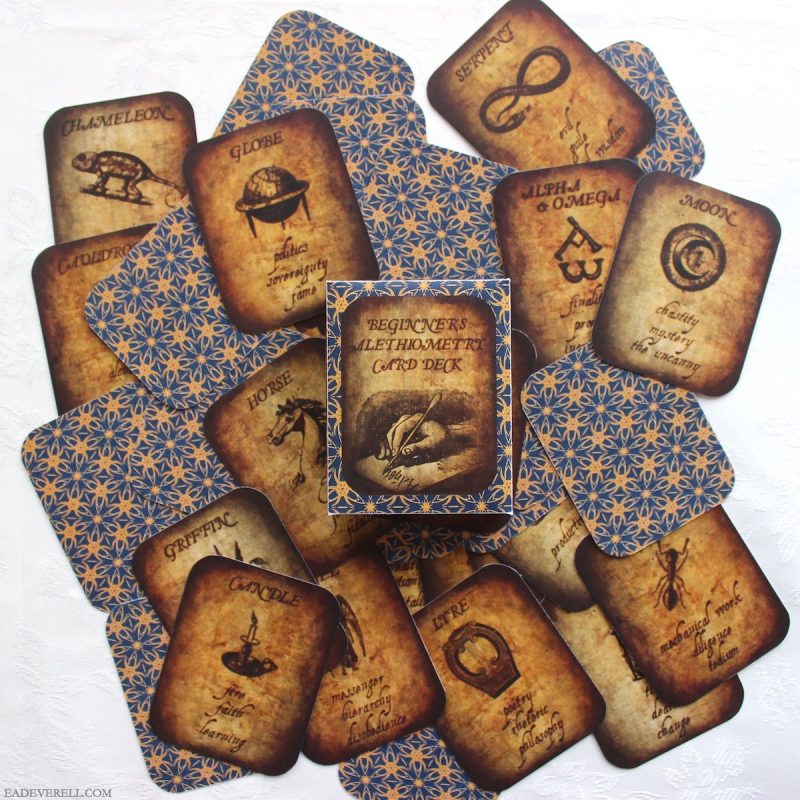 NaNoWriMo!
Despite my poor start, I’m still determined to rally! In better karmic news, the Lady Writers League’s annual donation is in, and I will be passing on the goodies to a few lucky members in the Drawing Room!

Masterclass*
Masterclass has a new all-access pass available! I am so excited to binge on classes in the new year. There are several writing masterclasses available already, but I would urge you to branch out and explore other disciplines too. Everything is relevant to the craft!

Paperchase Padfolios
On the stationery front, I’ve been loving the slow luxury of a padfolio, dip pen and ink. I know, it’s small wonder my NaNo is progressing so feebly…

Elementor
I recently discovered Elementor. It’s a fantastic free page builder plugin for WordPress. I’ve been looking for a way to share landing page templates with my Lady Writers for ages, and I think this will do the trick! It’s a beautifully-designed plugin and I highly recommend you give it a go.

The Memorabilia Pack Company
I loved having tea at the Fourteas Tea Room (a ’40s themed café) in Stratford. It reminded me of a company I meant to share with you all several years ago: the Memorabilia Pack Co who put together themed packs of reproduction vintage ephemera. If you’re a junk journaller, you’ll love them. They’ve also been a hit with my grandparents. ;)

Ambient sounds on Youtube
Search for “ambient” on Youtube and you’ll discover a whole world of background sounds that are perfect for writing sessions.

Pygmalion (1938)
I hadn’t seen this version of Pygmalion before, and I have to admit that it’s better than My Fair Lady. It’s now in the public domain, so you can watch it on Archive.org.

Howards End
I’ve only seen the first episode, of course, but I was delighted with it. Especially Tibby, who I’d quite forgotten about. I love how BBC period dramas draw attention to the beautiful materials that create the texture of the era, but without being too slow or artsy.

Also, family units are such rich loam for writers, not least because studying family characteristics can make you more aware of the behaviours of your own family, and how you can influence them, and of the curious ways in which other families function (or dysfunction). A few months ago, I read The Supporting Cast by David Galef, which discussed the Schlegels and Wilcoxes, and I intend to write up some insights for How to be the Heroine of Your Own Story.

* I am a Masterclass affiliate, but I pay for classes myself, and thoroughly recommend them!

For those of you following my translation of Forbi

”What happens when we understand things is that

November is a magical month.⁠⠀ ⁠⠀ Are you