How to Navigate Writer’s Block

Despite having received hundreds of emails from writers asking me if I knew how to overcome writer’s block… I remained a skeptic. I simply didn’t believe in writer’s block. I thought it was a phrase made up to excuse writers who were too lazy or unmotivated to sit down and do what they loved.

Now that I’ve read some of the academic literature on the subject, however, I think that for some people, writer’s block may be the very real result of certain self-defeating approaches to writing.

One reason I’ve been so resistant to the idea of writer’s block is because it’s often used to claim that there’s a difference between “creative people” and “non-creative people”. It seems to place creative work on a pedestal far above “ordinary” work, and to suggest that mental work is harder, more irregular, and difficult to summon up on cue.

Here’s Philip Pullman on the subject:

“Writer’s block…a lot of howling nonsense would be avoided if, in every sentence containing the word WRITER, that word was taken out and the word PLUMBER substituted; and the result examined for the sense it makes. Do plumbers get plumber’s block? What would you think of a plumber who used that as an excuse not to do any work that day?

The fact is that writing is hard work, and sometimes you don’t want to do it, and you can’t think of what to write next, and you’re fed up with the whole damn business. Do you think plumbers don’t feel like that about their work from time to time? Of course there will be days when the stuff is not flowing freely. What you do then is MAKE IT UP. I like the reply of the composer Shostakovich to a student who complained that he couldn’t find a theme for his second movement. “Never mind the theme! Just write the movement!” he said.

Writer’s block is a condition that affects amateurs and people who aren’t serious about writing. So is the opposite, namely inspiration, which amateurs are also very fond of. Putting it another way: a professional writer is someone who writes just as well when they’re not inspired as when they are.”

I think that in most cases, Pullman’s critique holds true. Writer’s block is such a convenient excuse for new writers to latch onto.

Experienced writers would never imagine pulling the “writer’s block” excuse, because they’re used to dealing with the complications of the writing process.

They’ve developed their own techniques to manage their work and their mental state.

They accept that things ebb and flow, and they know how to “ride out” (write out) each phase.

They know that the ideas, the words, the characters, the clues and the solutions will all come, because they always do.

Also, they enjoy writing way too much to be away from it for too long.

So, Does Writer’s Block Exist?

Searching for the coiner of the phrase “writer’s block” led me to this paper in which Edmund Bergler refutes all of the usual skeptical responses to writer’s block (including, incidentally, Pullman’s plumber response).

Bergler theorises that writer’s block should be treated as a psychological condition. However, the general dearth of research in this area since his work in the 1940s seems to suggest that most psychologists either didn’t agree with him, or didn’t consider the subject sufficiently interesting.

More recently, Mike Rose has studied writers in college environments, and has published some interesting observations, which I have used as the basis for the recommendations in this article.

Rose’s subjects are all students who have academic goals to accomplish.

But would someone afflicted with writer’s block really choose a career or even a hobby as a writer?

So if you’re a writer and you’re complaining of having writer’s block… you might just be railing against the day-to-day hassles of writing:

“I have writer’s block.”

Saying, “I have writer’s block,” will actually hinder rather than help you.

Sure, people may sympathise. Even non-writers understand writer’s block.

But the phrase, “writer’s block” will mask the real problems you’re grappling with. And until you recognise those problems, you won’t be able to find solutions.

Instead of “I have writer’s block,” how about saying:

In fact, here are some suggestions:

How Never to Experience Writer’s Block Ever Again

Based on Mike Rose’s paper 1980 paper, Rigid Rules, Inflexible Plans, and the Stifling of Language: A Cognitivist Analysis of Writer’s Block,  here are the 5 good writing (and thinking) habits that can keep you writer’s block-free forever!

If you feel like you’ve been following these habits and you still have writer’s block… you might want to re-consider your relationship to resistance.

1. Realise that rules are actually suggestions

There are many purported “writing rules” floating around on the internet.

But the truth is, there are no written or unwritten rules to writing. There are only guidelines, supporting frameworks, (potential) best practices, advice based on personal experience, recommendations and suggestions.

Yes, even the grammar “rules” that your teachers drilled into you, and that you fear you will be reviled for breaking, are only vague promises and not contractual obligations.

And I’m here to give you permission to break them.

Nay, I urge you break them, if only to see what you discover!

Sometimes we get so hell-bent on doing something a certain way that we don’t even realise that we’re trying to get through a door without opening it.

There is always another way.

And if the way you’ve been trying already hasn’t been working, then I can guarantee that the alternative will be the easier way.

Often the greatest difficulty is uncovering the conditions and expectations you’ve set upon your work. Once uncovered, you can decide whether the limitation is productive or unproductive for you.

Part of becoming aware of rules and conditions means being open to new ways of doing things, of being flexible enough to change direction when things aren’t working (even if they worked previously).

This requires a willingness to accept both internal and external evaluation, and to act on it, rather than trying to force something that won’t fit.

It requires a willingness to keep trying, and testing, even if you fail.

Or else manipulate it into something that works.

Rose suggests that being faced with conflicting rules can cause writer’s block-prone writers to become immobilised. Instead of enjoying grappling with the problem, they freeze.

This habit is in direct contrast to non-blocking writers who use writing itself to solve problems.

Lean into problems, take an interest in them, and see how they can become your greatest ally.

I’ve written about this at length in problem solving for writers!

I end with the most important mental writing habit that you can acquire:

REMEMBER THAT YOU CAN ALWAYS EDIT WHAT YOU WROTE

You can always edit.

Keep loving the evolution of your writing, your story, and your self.

“You can’t get it wrong, and you’ll never get it done.”

The epitome of creative thinking (and thereby creative writing) is the flow state. It brings together all 5 of these beneficent writing habits.

If you can learn to get in flow regularly, you can forget about writer’s block, or any other kind of creative block.

You can just get on with enjoying what you love doing.

Here is a fun game you can play when you feel “stuck”. 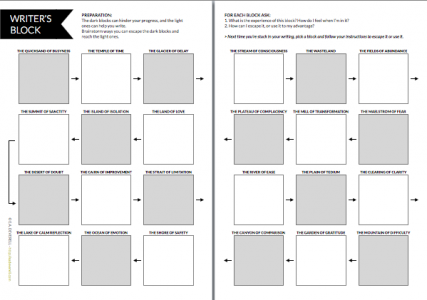 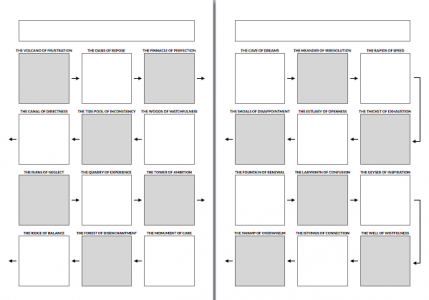 Your forfeit for landing on this post: Brainstorm a way to escape each dark block and use each white block in this worksheet. If you’re ever tempted to pull the “writer’s block” card again, pick a block (or a random number from 1-48) and follow your own advice. 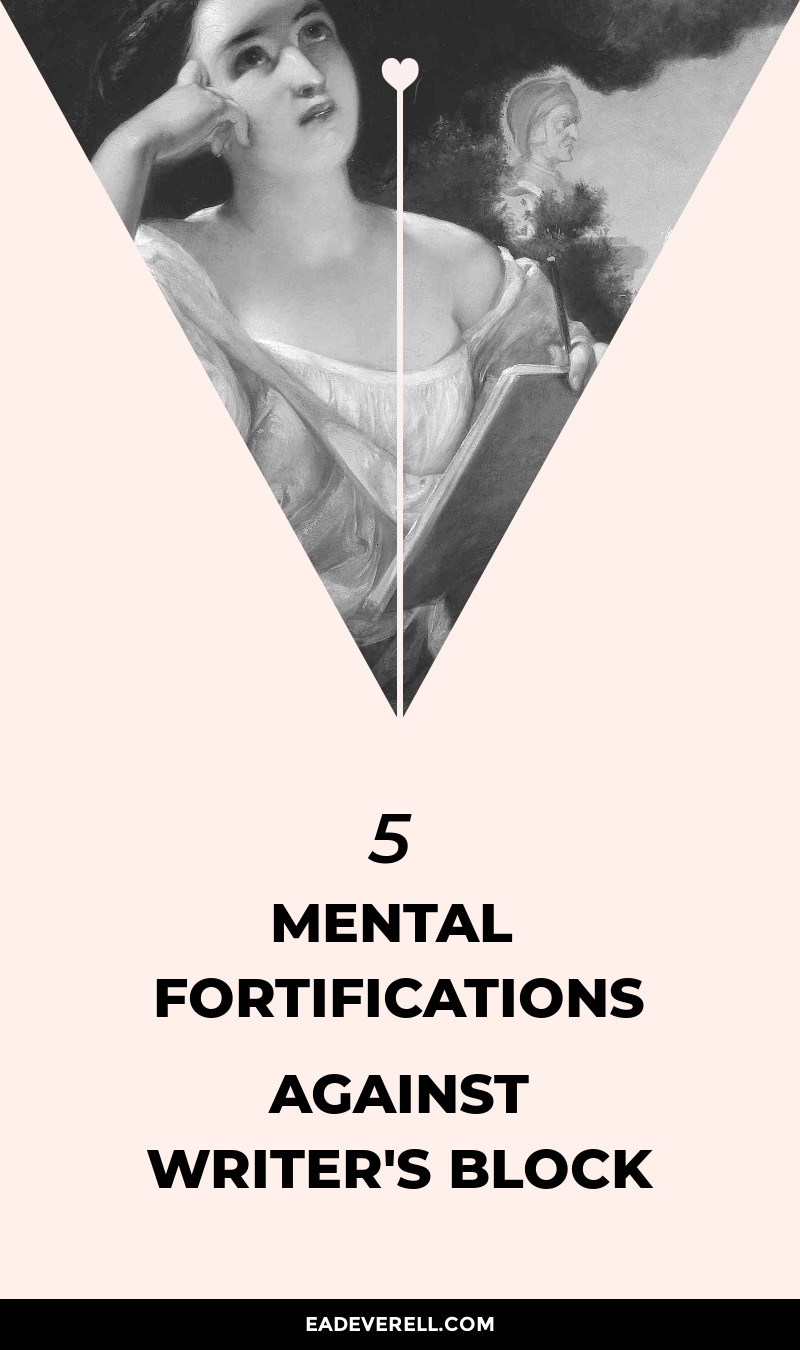