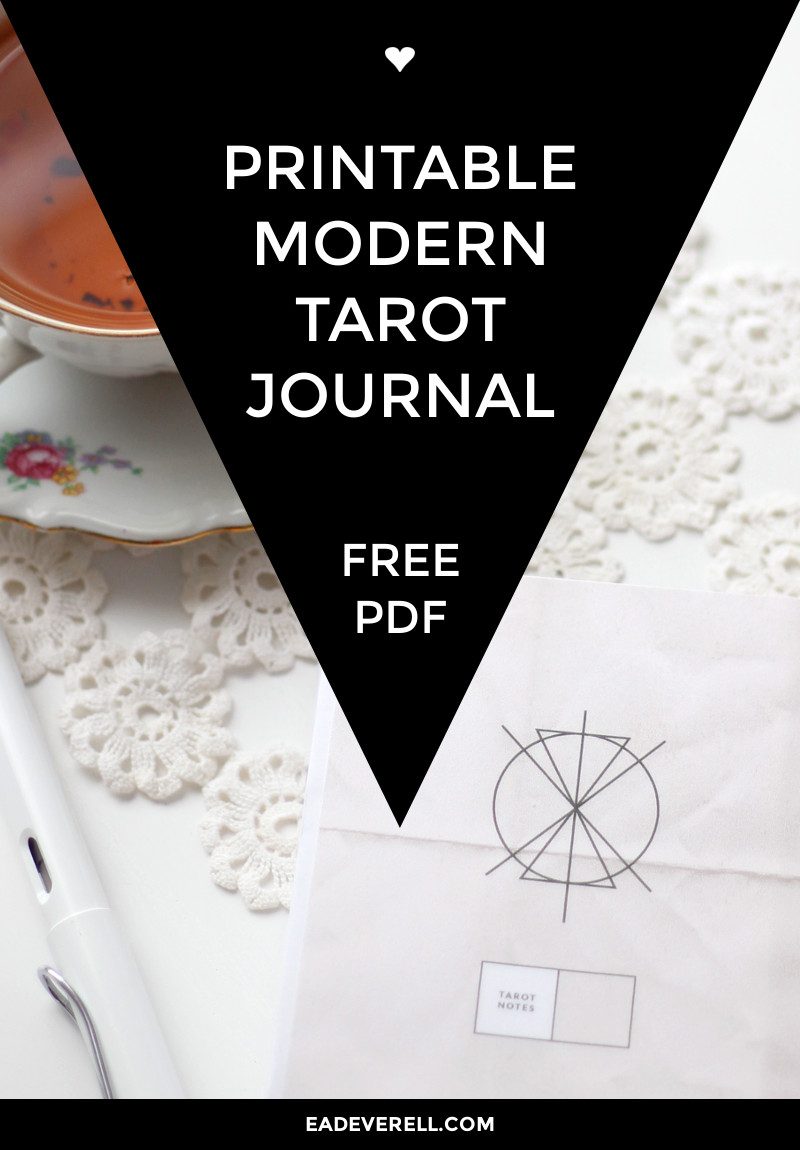 It all began with a search for simple Tarot symbols to use in my note-taking. I found this key which would have been a perfect solution, had I not got drawn into the challenge of representing the Major Arcana with as few shapes and lines as I could. The next thing I knew, instead of using the symbols to journal, I was designing a journal to lay out the symbols. I hope you’ll enjoy this by-product of my over-enthusiasm! :)

I’ve been reading up a lot on symbolism, and the Tarot in particular. The Waite-Smith deck must be one of the most elegant and beautiful symbol systems ever created. ✻ Whether or not you’re interested in divination (and perhaps especially if you think it’s new age nonsense), I urge you to make a study of the Tarot. If you’re a writer, you might be interested in my two-part post on the The Fool’s Journey for Writers.

✻ Although, I’m not ruling out the possibility of an ‘Alethiometer Study Journal’ in the near future. ;)

How to Use the Journal

Just a warning: the journal does take some time to put together, so you might want to begin with the two signatures of the Major Arcana, until you’re sure that it’s something you’ll use. 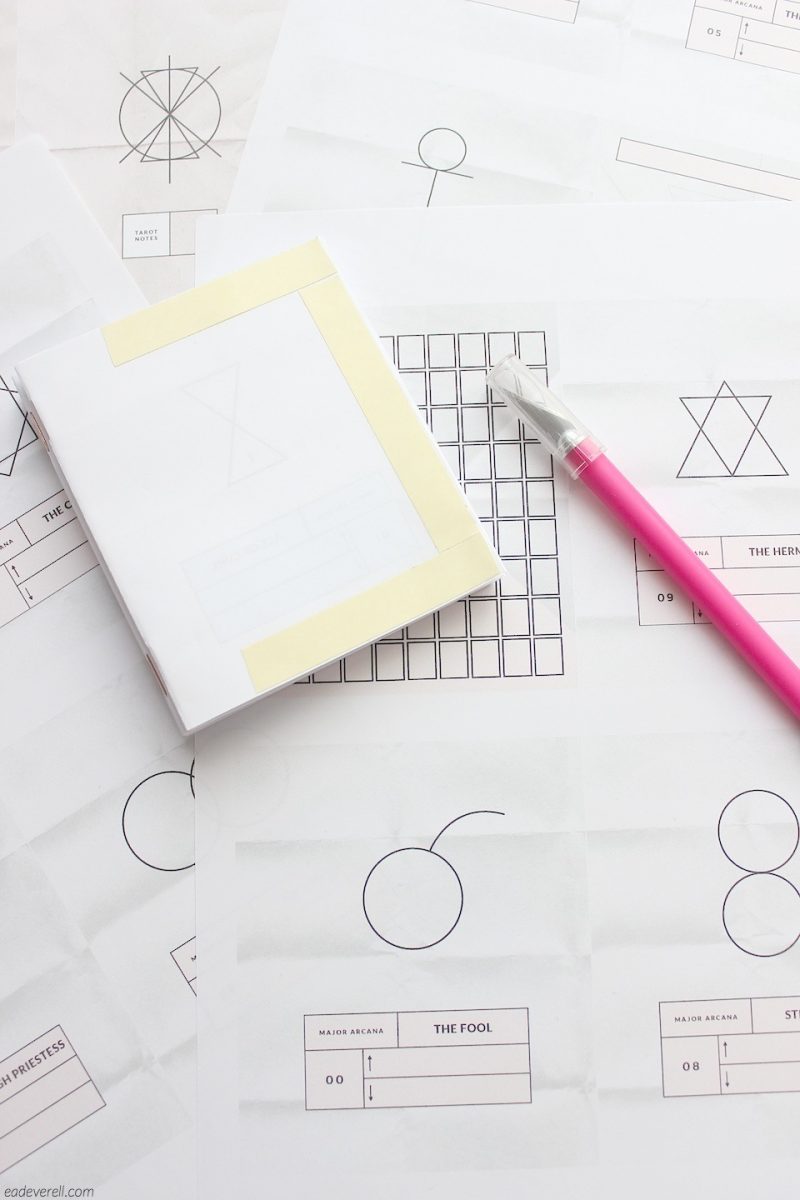 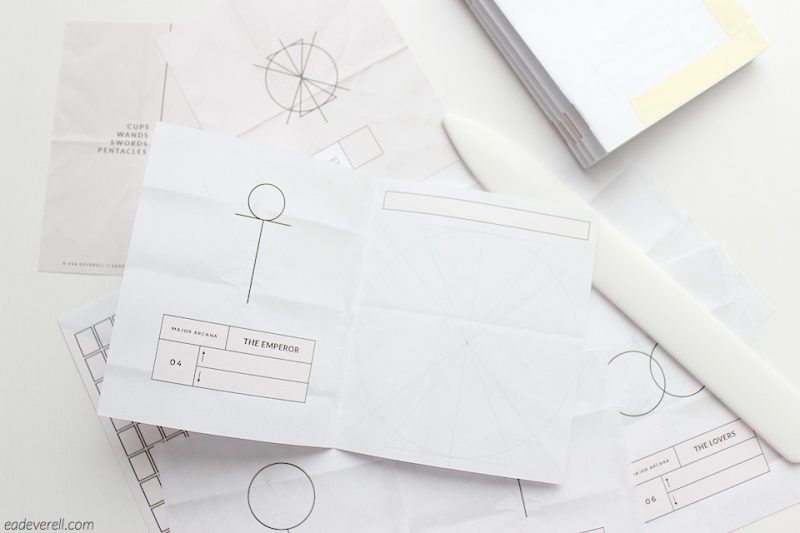 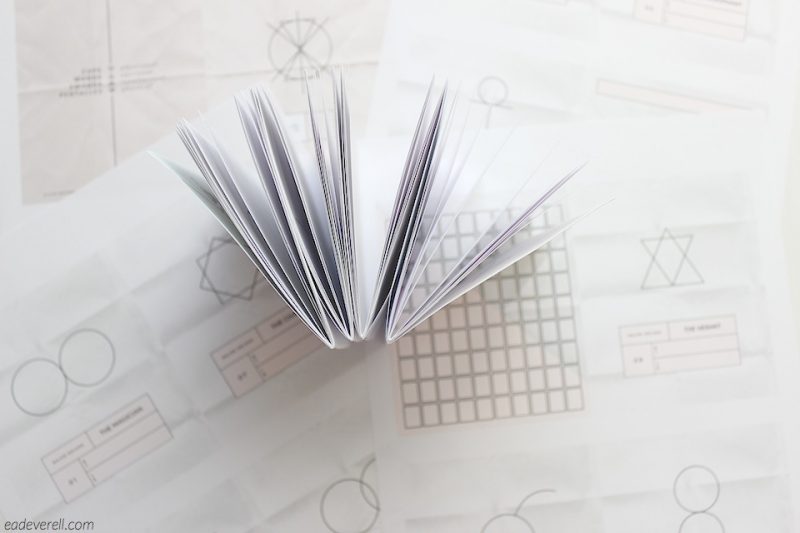 The journal is arranged into six signatures: two for the Major Arcana, and one for each Minor Arcana suit. To put them together, simply cut the pages out in pairs, fold them in half, order them and staple or sew them together. Then glue the last blank page of one signature to the first blank page of the next. Double-sided sticky tape is a good, dry option that won’t make your paper buckle. The front and back covers will need to be cut apart and glued separately to the first and last signatures. You might like to stick a piece of cardboard (the same size as the pages or slightly larger) to the front and back to add a bit of stability, or you could even create a large cover with a spine. I used an A4 sheet to create a slip-cover for mine (using the age-old textbook covering method), then glued the printouts to the front and back.

Alternatively, you can cut each page out separately, punch holes along one edge and slip them into a binder (or planner), or tie them together. Or you can secure them with a binder clip, or attach them to each other Midori-style.

Or, of course, you can keep the signatures as separate little booklets. Lots of options! :) 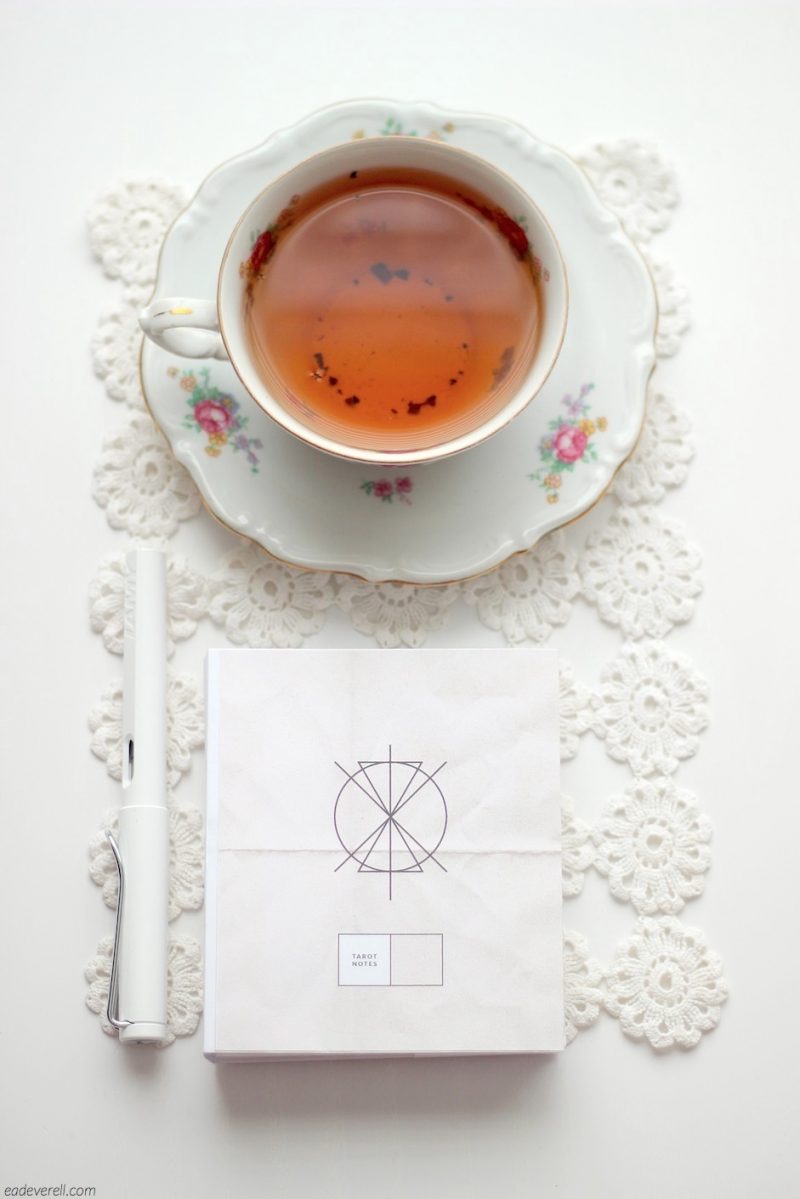 I tried to design the symbols to convey the meaning of the cards as well as to act as mnemonics for the Waite-Smith deck. In case you’re interested, here are some brief notes on my thinking…

Cups – I considered combining a half-circle with the sword to create the cup, but I really like the angular simplicity of the chalices in the Waite-Smith deck. I’m sure much can be read into the half-cone, half-pyramidal shape, and the way the two triangles resemble an hourglass.
Wands – I decided to make the wands into a symmetrical X so that I could use it in other symbols: Death, the Wheel of Fortune, the Star and Judgement.
Swords – nice and simple, but again, very combinative; you can see it in the Emperor, the Hierophant, the Hanged Man and the World.
Pentacles – I used the Waite-Smith name for the suit, but a pentacle seemed too elaborate. The circle works with the alternative names of ‘coins’ or ‘disks’ and recurs again and again in the Major Arcana symbols.
The Fool – I wanted to represent the feather in the cap of the fool because I find it interesting how it recurs later.
The Magician – two circles combine to create the symbol of infinity hovering above the Magician’s head.
The High Priestess – the circle and the curve of the feather combine to create the crown of Isis on the Priestess’s head.
The Empress – the circle and the sword combine to create the symbol of Venus and femininity on the Empress’s throne.
The Emperor – I find it interesting that changing the proportions of the Venus symbol creates the Ankh held by the Emperor.
The Hierophant – an extension of the sword, this symbol in the Hierophant’s left hand is called a Papal Cross.
The Lovers – the circles intertwine, or the infinity symbol collapses.
The Chariot – this gave me some food for thought. I felt the square was very prominent in the Chariot, especially as it represents the physical earth, but there was also the sense of balance of the spinning top. In my symbol, the solid square and the diamond combine to create the eight-pointed star on the charioteer’s forehead. I hope it isn’t too close to The Star!
Strength – the infinity symbol of the Magician recurs in Strength. I thought it would be fun to turn it around to resemble an 8, as it helps remind me that the Waite-Smith deck swaps the positions of Strength and Justice (8 and 11).
The Hermit – the six-pointed star of David can be seen in the Hermit’s lamp, but I thought it would be fun to play with it a little so that it also depicts the mountain summit.
The Wheel of Fortune – this was a relatively easy representation, but I like the way it resembles a steering wheel as well as a target. It combines the Wands and the Sun.
Justice – this was another difficult card for me. I was tempted to try some simplification of the scales, but in the end I opted for the circle-in-a-square that’s on the robes in the Waite-Smith deck.
The Hanged Man – this was a fun one! It combines the circle with the sword and an open triangle to represent the Hanged Man’s legs.
Death – I loved this symbol in the original journal symbols. A simple skull and crossbones that combines the wands and a circle.
Temperance – this may be easily confused with Justice, but once again I went with the Waite-Smith symbol.
The Devil – probably my favourite symbol! I thought the original designer did a great job with this. It’s almost an inversion of the High Priestess’s crown, and uses the same curve as the Fool’s feather.
The Tower – this was tricky. Much as I like the violence of the bolt of lightning, I’m fascinated by Hajo Banzhaf’s observation that in the original Marseille Tarot, it was a feather that destroyed the Tower. Hence, I combined the curve of the feather with the toppling spire, to somewhat comic effect.
The Star – a simple doubling of the wands to create eight points.
The Moon – another favourite! The curve of the feather/crown of Isis creates a gentle horned moon in the circle.
The Sun – this is the standard symbol for the Sun, though I admit that the idea of creating sunbursts was very tempting!
Judgement – a representation of the angel’s flag and the coffins.
The World – an inversion of the Hanged Man.